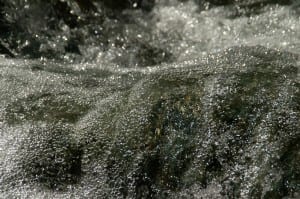 The more intensively we deal with the issue of water, the more puzzling we feel towards how it works …

As a brief introduction into the science of water one must realize that up to present in the traditional science there has not been any evidence of various states of “liquid” water, therefore the following discovery can be considered sensational.

For some time now Dr. Elmar Fuchs has attracted great attention within the world of physics with his publication about the fascinating water phenomenon, namely the floating water bridge.

The water bridge is a phenomenon that was discovered by William Armstrong in 1893 and has been forgotten until recently. In this demonstration two glasses with distilled water are placed under tension, which forms a floating bridge between the two glasses.

Dr. Elmar Fuchs changed from the TU Graz to the Netherlands, where he is now Scientific Project Manager and Researcher at Wetsus – Centre of Excellence for Sustainable Water Technology. Using the most modern technology and perfect, optical measuring instruments he is able to continue his research on the phenomenon of the water bridge.

With success as we can see

Through high-speed cameras and femtosecond lasers, it was established that water forms further structures apart from the already known “loose” and “firm” connections (appropriate for liquid water and ice). With this one has entered “No Man’s Land” between “loose” and “firm”, and has expanded the classic knowledge regarding water.

Water in a liquid state does not form firm structures – actually connections in the water network change incredibly fast – within femtoseconds (10e-15). The research at Wetsus has shown that this dynamic changes significantly if a strong electric field is placed near water. This is also highly relevant for biology since comparable and even stronger fields appear in living cells.

In fact, a further study by Wetsus in co-operation with NASA has demonstrated that bacteria, which are transported via the water bridge, show a more active behaviour than the control group or the ones that did not go through the bridge.

Johann Grander – ahead of his time

“What this actually means cannot be truly estimated at this time, but it may be the beginning of a new (dynamic) water model.”

The fact that water has the ability to take on various states corresponds to the ideas and concept of Johann Grander, who discovered more than 30 years ago that water can be altered through the treatment with his natural magnet motors into having a very high, inner order (structure). This very concept of water’s behaviour discovered by Johann Grander is embedded in the idea: through the improvement of the water state a stable system can be created, one that has a stronger self-cleansing power and therefore a higher water quality as a result.

The need for a new water model has become important

For many years the need for a “new” water model has become more and more important due to the numerous anomalies of water. The sensational discovery by Wetsus emphasizes this scientific demand. When, or if, a new generally valid water model will be established is unknown. However, we know that there are and will always be discoveries that challenge all present-day physical laws and that the water research has not reached its peak at all.